Panic attack refers to sudden or unexpected onset of fear or terror that often seems to come out of the blue.  The episodes of these attacks can occur anytime and anywhere. The panic attacks are often emotionally overwhelming and are accompanied by physical symptoms. The person experiencing them may feel that he or she is having a heart attack or is going crazy and is often concerned about having another attack or about the consequences of having such attack. Another characteristic of panic attack is that these episodes occur in situations where they are least expected like during sleep or during relaxation and often last for not more than thirty minutes. However, in some instances, panic attack can be situationally predisposed, occurring only in certain situations such as being in a crowd or while driving. If left untreated panic attacks can develop into panic disorder and other difficulties and can become quite disabling. If you have experienced one or two such episodes without any further episode or complications in the past month, chances are that you are not suffering from panic disorder, and there’s nothing to worry. However, if you have been repeatedly experiencing such episodes along with fear of having another attack combined with major behavioral changes, for at least a month, then you might be suffering from panic disorder or at the risk of developing panic disorder.

Symptoms of panic attack include:

Here are some effective strategies to handle panic attacks:

Breathing exercise: Panic attacks can often cause rapid breathing and this hyperventilation can actually worsen the symptoms. Hyperventilation leads to light-headedness, dizziness, palpitation, tingling sensation in feet and hands, and breathlessness, which can actually make the experience more overwhelming and terrifying. Engaging in breathing exercises, however, can really help you ease yourself and control the related symptoms. Engaging in diaphragmatic breathing can actually help calm yourself as you start to experience the symptoms. Close your eyes and slowly inhale deeply through your nose and exhale slowly through your mouth. You can count to five as you breathe in and out. Try to concentrate on your breathing.

Avoid alcohol, smoke, and caffeine: Eat a healthy balanced diet and avoid consuming caffeine, alcohol, and smoking as these have been shown to make the symptoms worse.  Furthermore, avoid medicines that contain stimulants.

Relaxation techniques: Engage in relaxation techniques like progressive muscular relaxation, yoga, and meditation. Make them a part of your daily routine as these activities tend to calm mind and body, and help keep anxiety symptoms in check while inducing feelings of happiness in general.

Exercise: Exercise has been shown to release feel-good hormones and hence, works as a natural anxiety buster. You can engage in walking, running, or simple aerobic exercise for at least 30 minutes daily. Even dancing for 30 minutes can help relieve anxiety symptoms. 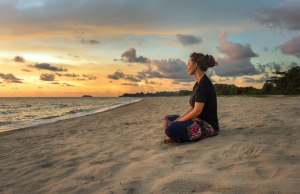 Concentrate on the objects: As your experience symptoms of panic attack, try to focus your mind on some object that is in your sight.  Try to observe all the details of the object. This can help you distract your mind. As you concentrate you may feel the symptoms are settling.

Acknowledge: Since most of the symptoms of panic attack are often physical and the person experiencing them can feel that he or she is having a heart attack or is about to die, it is important to first and foremost acknowledge that you are having a panic attack. It is important to rule out any medical condition, and once that is done, you should educate yourself about panic attacks. Learn about the symptoms and find out any cues that act as a trigger. This can help you manage your condition more effectively. You might experience that the symptoms are not as overwhelming as they used to be. Once you acknowledge that you are having a panic attack you will be able to calm yourself more quickly and effectively.