The Baader–Meinhof Effect or Frequency Illusion 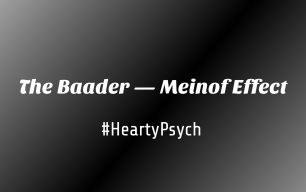 The BAADER–MEINHOF EFFECT, also known as frequency illusion, is a cognitive bias and refers to a phenomenon where things or objects that an individual has recently noticed like a name, a word, etc. suddenly seems to appear with strange frequency afterwards. In this phenomenon, the person who has recently paid attention to something obscure or unfamiliar begins to encounter that newly learned information in unanticipated situations. It gives an impression that out of nowhere, the new information is rapidly surrounding him. The reason is that the brain starts noticing the thing, which was once unfamiliar. One interesting thing about this phenomenon is that it is not named after the linguist who did research on it. Rather it is named after a West German militant group which was founded in 1970. However, the militant group has nothing to do with the phenomenon. It was named after the group when a reader of St Paul Pioneer Press first noticed the mention and then randomly heard two references within 24 hours out of nowhere. The phenomenon is a result of two cognitive processes namely selective attention and confirmation bias.